B.K.S. Iyengar - On his life and passing On August 20th, the world lost a man who in some way, influenced almost everyone who does yoga these days.

Here are the best articles I've found to get an idea of why:

Iyengar and the Invention of Yoga- The New Yorker

The Amazing Contortions of B.K.S. Iyengar- The Atlantic

B.K.S. Iyengar: The geruji who brought yoga to the masses - Aljazeera America

Death of a yoga giant.....- The Washington Post
Posted by Carrie Mann at 19:22 No comments: Links to this post

It's a bit late to be talking about New Year's Resolutions............or is it? The Resolution is not just something to declare at the beginning of the year, that's not the accomplishment. The thing is to actually stay true to the commitment, throughout the entire year! (It's the follow-through - as Jerry said in one of my favorite Seinfeld episodes regarding reserving a rental car: "You know how to take the reservation, you just don't know how to hold the reservation.....")

So even though I did not get a chance to write about it at the beginning of the year, I did re-declare my resolution to do yoga every day in 2014. I made the same resolution for last year (see Creating and cultivating your home practice - starting the New Year). And I will admit, I was not perfect. There was a good handful of days when I missed or even forgot to roll out my mat, but I did stick to my resolution despite stumbling, and continued my practice through December 31st.

Now, in March 2014, I can say I have only missed 2 or maybe 3 days. One of those days I was travelling, beginning at 3 am to late that night. Another of the days I missed I woke with the stomach flu which lasted the whole day.

So I have not been perfect, but for me, the resolution is not about being perfect, it's about being committed. I am committed again this year to do some yoga practice/meditation each day. Would anyone like to join me in this commitment? It's never too late.
Posted by Carrie Mann at 21:57 No comments: Links to this post 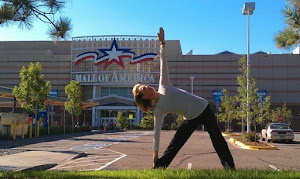 Dancing Earth Yoga is committed to bringing the benefits, peace and joy of yoga to anyone, including pregnant and postpartum moms, seniors and those with other physical restrictions.

We offer classes in the Monterey Bay Area of California.